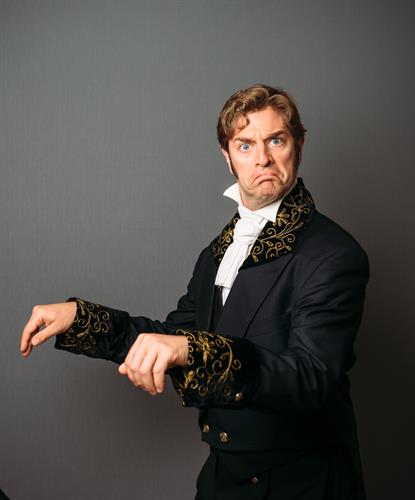 It is a truth universally acknowledged that an actor in possession of a woman’s story must be in want of a wife–to help him adapt it. Charles Ross, (One Man Star Wars, One Man Lord of the Rings, One Man Dark Knight) tackles the greatest romantic comedy: the intrigue, dancing, proposals, are given the one man once-over.

Combining comedy, courage, and creativity: Charles Ross has blazed across the theatre world with his “One Man Star Wars Trilogy” and “One Man Lord of the Rings”. He’s toured the world with “The One Man Star Wars Trilogy”, doing a five-month run Off-Broadway in New York, a week at The Garrick Theatre in London’s West End, two sold-out runs at the Edinburgh Fringe, appearances on “Late Night with Conan O’Brien”, “The Today Show” and “Last Call with Carson Daly”. He did a series of bumpers for an HBO Cinemax Star Wars marathon. He’s played regional theatres and festivals across Canada, the US, Australia, New Zealand, the United Arab Emirates, Singapore and the UK. He’s played to audiences of thousands at a time at Star Wars Conventions and other Science Fiction and Fantasy Conventions. He did a command performance for the cast and crew of Vin Diesel’s film “The Chronicles of Riddick”. He’s hung out with Seth Green. He’s had lunch on the set with Sir Ian McKellen.